Co-Curator Liz Wewiora discusses the work of Sarah Forrest and how personally she responded to the style of the work, a gentle reminder her own photographic interest in the power finding sculptural beauty in the domestic and everyday.

“Stumbling into the black out corner of what otherwise remained a stark white gallery space, I found myself drawn in further by the sound of a rhythmic female voice. This was the beginning of my real relationship with Sarah Forrest’s work, having the pleasure to meet her in 2014 whilst working at Glasgow Sculpture Studios and discovering her new video work within that very gallery space.

What struck me so clearly were the familiar framed shots of the domestic and everyday, that I myself am drawn to as a photographer, but with a distinct self authored narration. Often these narratives are delivered in such a way to trick you into feeling you are part of a song, the words are spoken so lyrically and soothingly you start to lose yourself somewhere between the spoken word and the very visceral nature of the moving images put before you. And through a playful weaving of narrative, which explores theory, philosophy and fiction of the self, you feel invited into a very personal encounter between artist and viewer.

For Tall Tales, it was a pleasure to work with Forrest to showcase two new works, which took a leap away from the self-narrated voice into subtle self-narration through text and familiar sound. 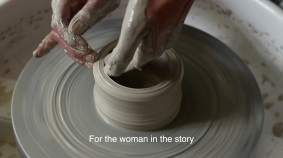 The Pot (2015), which was showcased for the London leg of our Tall Tales tour, at Freud Museum, represented the artist’s urge to return to working in sculptural form, referring back to the most basic of materials – clay. Text appears on the screen to reveal a narrative from the artist about her experience with the clay, how naturally the pot seems to form, despite her fear it could fall apart at any given minute. A charming if not satirical popular culture reference to the love affair between herself and the material is put to the audience from the on-set with a short sound bit of ‘Oh my Love (Unchained Melody)’ from the soundtrack to the 1980s film Ghost. The music comes to a sudden stop however with the thud of the clay hitting the pottery wheel.

The second work Recital (2016) is based on the artists’ time learning to play the drums, and initially the drum solo for Led Zeppelin’s Moby Dick (T

he Albert Hall version). What followed was an intense period of practicing, feeling and experiencing the way the body learns to repeat actions and respond to rhythm. It was this underlying rhythm and beat, which appears within the film, but presented through a series of everyday actions, rather than a drum solo per say. We start to hear and feel the rhythm through these repetitive everyday moments, and the tight editing process beautifully mimics the beat she must so intensely been studying. The film is purposefully presented as a split screen to echo the working of both her left and right side of the body; a separation both physically and emotionally needed in order to learn the drums.

Recital (2016) is on display alongside the rest of the Tall Tales exhibition at Glasgow Women’s Library until 21 December so catch that beat whilst you can.”