We hear more from Tall Tales assistant Curator, Charlie Booth, on the work of Jacqueline Butler, weaving in and out of the processes and exchanges between people and place within her work…

“Currently hanging in the Tall Tales exhibition is a tremendously rich and colourful tapestry; consisting of a series of different circles with appliquéd and stitched narratives within each circle. On Hearing of His Illness (Mapping Household Management) (2014) is by the artist Jacqueline Butler whose practice evaluates domestic histories and the tangibility of the contemporary photograph and explores themes associated with analogue photography, of loss and melancholia.

In 2012 Jacqueline Butler visited the Kala Raksha Trust in the Kutch region of India. A grassroots social enterprise, Kala Raksha is dedicated to the preservation of traditional arts. Founded in 1993, it comprises of artisans, community members, and experts in the fields of art, design and museums. There she met two of the founding members Meghiben Meriya and Raniben Bhanani, each are internationally recognised as patchwork designers creating narrative artwork. Upon meeting, the women discussed personal histories with one another. Meghiben and Raniben began relaying stories to Jacqueline including migrating to different villages, living temporarily in refugee camps and eventually gaining Indian citizenship. From these conversations Jacqueline wanted to develop maps of the women’s current everyday domestic life. She writes

‘These maps would focus on a celebration of the everyday, making visible daily chores and thoughts often considered of little relevance and invisible from view.’

Central to the creation of the work was the focus that Meghiben and Raniben took the lead in the creative dialogue. That they defined themes for their maps and Jacqueline would respond to the activities charted once the quilt was completed. I think that this participatory or collaborative way of working has also come across in the finished creation. For example when the work was displayed in Tocuchstones Rochdale I remember one lady remarking on how different sections of the tapestry differed in technique and style as well as subject matter and asking if more than one person had made the tapestry. A subtlety which was lost on me, a novice in stitching and tapestry making, but which was very obvious to those skilled in the art form. Jacqueline responded by explaining that the two women had very different characters, opinions and ways of working and that this came across in the finished work.

The second element of the work by Jacqueline Butler in the Tall Tales exhibition is a series of nine circular photographs in handmade white frames entitled On hearing of his illness (I realised they were plants that needed watering) (2014). Each image depicts plants and flowers gently lit against a plain background. This work was created in response to Jacqueline receiving news of her father’s diagnosis of Cancer. She explains that

‘I contemplated Raniben and Meghiben’s lyrical thoughts on the importance of simple acts such as watering plants and feeding birds during times of hardship and pain.’ 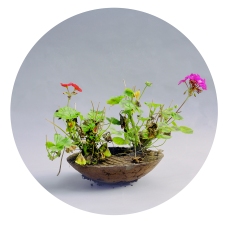 I think there is beauty in the simplicity of this series of photographs. An experience that is painful and difficult and all too common now (with one in two of us being affected by Cancer in our lifetime) it must be a very hard thing to express in a visual form. As Jacqueline explains above, the plants that are featured in the photographs, belong to her father and caring for them during his stay in hospital became a task that gained significance in her day-to-day life.

I take comfort that a dialogue between the three women in India resonated with Jacqueline on her return to the UK and everyday life. To me this is what the Tall Tales exhibition has been all about. I have enjoyed watching the different dialogues between the female artists and curators but most of all dialogues between the artwork as and when they shift position in each new space in London, Rochdale and now Glasgow.