Animating and electrifying this weekend’s Blackpool Art Carbooty event will be the newly commissioned ‘Pier to Pier’ (#BigThings, Smaller than I remember); an immersive installation and live durational performance by Blackpool’s own Harry Clayton-Wright and Manchester based artist Richard Shields.

The performance will literally spill out into the streets around the Winter Gardens this Saturday!

The performance plays with the nostalgia felt by those who remember Blackpool as a child but now re-engage with the town as adults. Whether as a tourist such as Shields or a home town boy like Clayton-Wright, the imagery of things being ‘far smaller than they remember’ resonates as the tag line to this performance.

The performance will be packed with Blackpool social and visual reference with everything from British folklore to celebrity seaside glam and popular culture from now and then.

Since its development, both artists have spent time on-site both within the Winter Gardens and the town itself to further investigate their characters and place within this seaside town.

As a result of this, we are delighted to announce that the Pier to Pier performance will include an opening dance act with the locally based and internationally recognised Urban Dance Project (UDP). The organisation, who will be performing with their young UDP BREAKERZ CREW in response to and in collaboration with artists Richard Shields and Harry Clayton-Wright, will be bringing the best of young dancing talent into the foreground of Blackpool Art Carbooty, dressed and ready to perform between 12.15-12.30 on the Saturday 31st October. 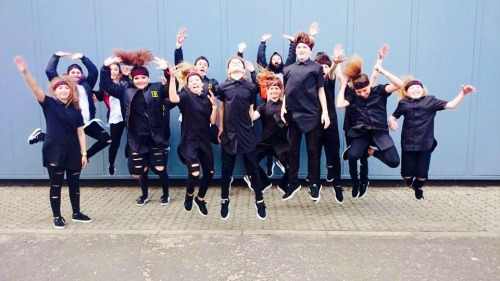 Expect a new take on ‘perma-tan’, some undeniably impressive urban dance moves and an altogether surreal and contemporary take to Blackpool’s fantastic heritage and culture!

The Pier to Pier Commission is kindly supported by Leftcoast, Art, People and Places.