As the Tall Tales exhibition comes to an end at Touchstones Rochdale, and prepares for its way up to Glasgow, assistant curator Emma Flynn takes some time out to tell us more about the work of Alison Erika Forde.

“Before talking about her works I think it is important to give some context to her practice as an artist. As a graduate of Manchester Metropolitan University, Forde (b.1985) lives and works in Manchester. Since graduation she has shown work across the UK, as well as internationally through her gallery, International 3, and her work is in private collections in Austria, the Netherlands, Germany, Spain, Switzerland, the UK and USA.

For those of you who have never seen the work of Alison Erika Forde it is certainly something to look forward to. Before work on the Tall Tales project began I wasn’t familiar with her practice and I am glad to say this is something that has been quickly remedied, and I enjoyed delving into her practice a little deeper to write this short piece.

Forde’s works take a variety of forms as her paintings and sculptural pieces adorn found objects, typically bric-a-brac, mass produced prints and other old or second-hand unwanted items. Forde herself describes these as ‘unwanted’ or ‘undesirable’ and those who have worked with her before, or who have experienced her work, can see how her paintings are able to rescue and transform these pieces.

The objects themselves, although integral to Forde’s work, are only one part of the story. The scenes and characters that Forde creates are, themselves, captivating and also at times unnerving. Her humour and playfulness certainly comes through to balance what are described as ‘anxiety stricken characters…awaiting impending peril’; and this can certainly be seen in the work exhibited in Tall Tales. In spite of the ominous situations her characters find themselves in the colours stress her playfulness and allude to a mildly disconcerting vista which we might more easily recognise in foreboding folk stories or fairy tales.

One of my favourite works that I wanted to highlight from the exhibition is Forde’s Shame Pole, 2012. These take the form of cardboard containers, stacked one on top of one another and adorned with emulsion and metal paint depicting different scenes or faces. 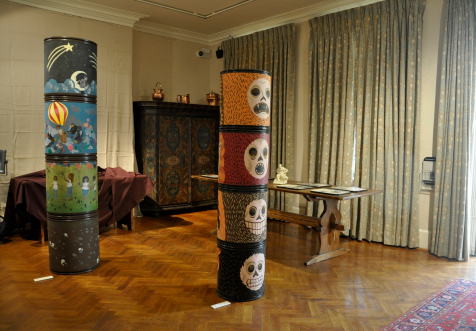 At first the works resemble totem poles standing boldly in the room but their history and reference to the cultures of indigenous people of the Pacific Northwest has a darker connotation. These Shame Poles were erected by locals in public places in order to shame individuals for wrong doing or bad debts. Forde’s intention is for her shame poles to provide the viewer with an opportunity to imagine who they might be for, the artist has not designated who has to be shamed and thus the audience can assign them to whomever they choose. This work for me epitomises some of the themes running throughout Forde’s work, a link to folk histories and customs, but bringing that into the modern era with her choice of found materials. Most of all the sense of humour and mischief that comes both from her use of colour but also in inviting the audience to become complicit in the practice of public shaming, as they imagine who they might shame, albeit in a unspoken way.

In addition to Forde’s artworks in the Tall Tales exhibitions, the writer Jenn Ashworth has developed a work of fiction inspired by Forde’s practice. This is an exciting new commission to emerge during the midst of the Rochdale presentation of the tour and something that Glasgow audiences will be able to enjoy during a reading as part of the opening preview activities at Glasgow Women’s Library in October.

Further works by Alison Erika Forde which are included in the Tall Tales show are: A Girl of Trinidad, 2015; The Outsiders, 2015; Tower, 2013; and Speak No Evil, 2015. Forde’s work continues at Touchstones Gallery and Museum, Rochdale until 3 September, before travelling to Glasgow for the final exhibition in the Tall Tales tour at Glasgow Women’s Library, 22 October – 21 December 2016.

View all posts by wewiora