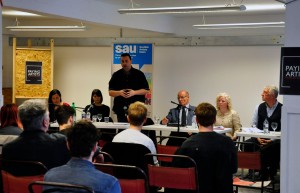 Last weekend’s Cultural Hustings raised some up- front and honest discussion for the Paying Artist Campaign in Glasgow.

The Political Panel, made up of representatives across the various parties all contributed to the current debate, most with a positive and pro-active voice for fair pay amongst artists and their wider sector.

In particular SNP, Green Party and TUSC argued the case for artists to be considered on equal professional rates as other public sector wage levels, with some speakers genuinely shocked to hear that most artists bring in no more than £10,000 a year income.

The Liberal Dem speaker Chris Young came from a personal view point as a theatre practitioner himself, knowing all too well the overly accepted view that artists will work un-paid simply for the ‘opportunity’. Whilst Labour expressed an acknowledgment  of the complexities of payment within the art sector and a responsibility to support guidelines for all involved.

The Conservative speaker warned that artists have been paid unfairly for centuries, with this current dialogue being nothing new, and if artists were to be paid more like salary workers then they would need to consider their roles more like civil servants, and art created would be for the state, and not their own intellectual property. Needless to say there were disagreements within the room to oppose this particular point of view.

It was refreshing to hear actual political approaches which could be transferred to the arts sector to ensure fair pay or at least protect existing pay going forwards, such as Green Party’s policy to stop Universal Credit in its current form, or TUSC’s argument that artists’ trade unions should be at the principal and very start of policy making for the arts sector.

With the outcome of the election now fully aired, for Glasgow and Scotland at least it looks like SNP hold a strong voice for policy making going forwards, and we are delighted to have SNP and Glasgow Life’s David McDonald on board for supporting the campaign as it develops.

And a special thanks for Pavel and Sean, our Glasgow artists who documented the day’s session with live recording and illustration. Keep an eye out for the illustrations and video on the a-n social media soon!